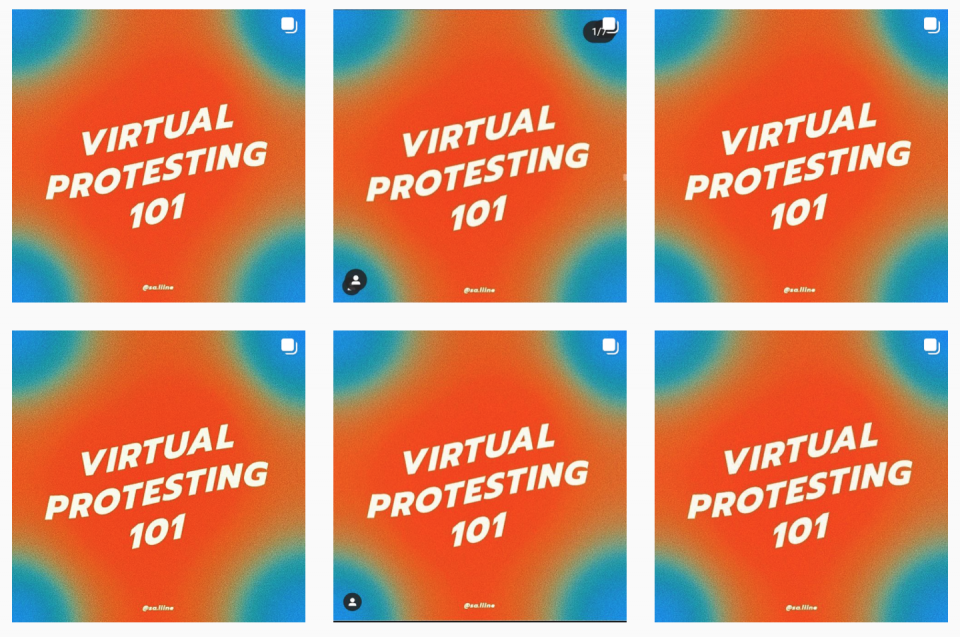 In wavy, bold letters splashed in front of a colorful gradient, a guide to activism on Instagram reads: “VIRTUAL PROTESTING 101.” One swipe further, the next slide says, “Time to use the algorithm to our advantage!” In seven images, this Instagram carousel prompts users to use the platform to take action, whether that’s by disrupting hashtags like #buildthewall and #backtheblue to spread the Black Lives Matter message or by taking care to add warnings to graphic content.

Anyone with an Instagram account and the will to join in on the now-global uprising in support of Black Lives Matter can follow along; then, they can easily pass the message to their followers. As Manassaline Coleman, the Liberia-born, D.C. metro area-based graphic designer who created the images, wrote in her post’s caption, “So the question is how can we continue sharing but do it in an effective way?”

Coleman’s design has been shared over 350,000 times, reaching at least 2.1 million people as of late last week (those numbers don’t include the reach of its many reposts). There are translations in Swedish, Norwegian, Japanese, Chinese, Russian, German, French, Spanish, Italian, and Portuguese. And though prior to the post, Coleman might not have considered herself an activist or a political person, her design is part of the rising wave of Instagram protest art prompting people to action.

Politics and art have always been inextricable, but Instagram now mediates that relationship. Its ecosystem of artists creating and users circulating through stories and feeds has spread protest art across the platform. While activist corners have always existed on Instagram, the recent, tragic deaths of George Floyd, Breonna Taylor, and Ahmaud Arbery and the protests they’ve catalyzed are breaking the silence of previously apolitical users. Through art and design, Instagram functions as a megaphone, especially for users who may have otherwise said nothing.

“When everything started happening, I felt very helpless,” Coleman told VICE. After watching the video of Ahmaud Arbery’s killing, Coleman thought about the way other graphic videos of Black people being killed have spread online, and she wanted to help the conversation about Black Lives Matter go further than the Black community. “As much as real life is segregated and separated, social media is as well, because you can create your own experience. My idea was, how can we reach those people? How can we protest with them virtually?”

#BlackLivesMatter has mobilized social media since 2013. With every death of a Black person at the hands of the police, there are tributes, photographs, and the troubling dissemination of graphic videos. But since the protests began in Minneapolis following George Floyd’s death, Instagram has clearly changed: Instead of food photos, curated interiors, and posed selfies, people are posting and sharing aesthetic yet informative images as a form of political action.

There’s now an inescapable flow of videos of people getting killed or beaten by the police, tense standoffs, and people running in fear from batons and tear gas. But through this type of art, there is a softer side to the protest imagery on Instagram. “I noticed people sharing the videos of Ahmaud and George’s deaths on social media and wanted to create an alternative that wasn’t triggering and traumatic,” freelance designer and illustrator Shirien Damra told VICE. To honor their lives in a way that was “soft, yet powerful and dignified,” Damra illustrated Arbery, Taylor, and Floyd surrounded by colorful flowers. Instagram protest art provides a way to stay informed without seeing the barrage of violence.

Previously involved in community organizing, Damra sees art as a catalyst to unite people in action against systematic oppression. Since art is more accessible digitally, she said, “This opens a way to reach more marginalized communities who need art most in this moment. It also gives us a platform to spread awareness and call for action.” As of this writing, Damra’s portrait of Floyd has reached over 10.4 million people.

Using colorful illustrations and creative typography reminiscent of show flyers, artists and designers on Instagram have made memorial portraits, infographics detailing steps to abolishing the police, drawings depicting the cost of policing, and slides that share statistics about police violence or amplify famous quotes. Before the current protests, the Center for Cultural Power, which combines art and social justice, created a COVID-19 strategy guide to suggest ways art could see people through crisis, which read: “The role of the artist has never been more important… Artists activate the imagination, they soothe, comfort, and move to action.” That role is even more relevant now.

Instagram protest art is something you can like and save—but above all, it’s something you can share. The aesthetics are intentional: “It’s unfortunate, but people do not like to put ugly things on their feed on Instagram,” Coleman said, adding that people don’t want to share things that “break their aesthetic.” But many artists have learned that when a text post is thoughtfully designed, the message gets across more easily.

Recently, you’ve probably seen the work of Nikkolas Smith, a former Disney theme park designer who’s now known for his digital paintings of George Floyd, flanked by the words “Justice 4 George”; Breonna Taylor in her EMT uniform, “Say Her Name” beside her; Ahmaud Arbery, in a bowtie with his eyes closed. Former First Lady Michelle Obama used these paintings to accompany her call to action about racism in the United States, a post which over 1.3 million people have since liked.

Seven years ago, Smith began his “Sunday Sketch” series as a way of processing personal struggles. He creates portraits that celebrate the successes of the living, from the release of Ava DuVernay’s When They See Us to Simone Biles’s championship wins, but he also makes art commemorating the dead. He says people have come to expect these visual eulogies from him; though his art started as a way for Smith to process his own feelings, it has taken on greater resonance through its audience online. “I feel like now it’s gotten to the point where it’s still therapy for me and it’s therapy for other people too, and I’m proud about that,” Smith told VICE.

In a moment like this one, Instagram art can help people show their support, but it can also open the door to discussion. “A lot of people who say that they are allies, they’ll message me and say, ‘Obviously I’m not Black, but I wanted to speak about this with my family and sharing this art allowed us to have a conversation,'” Smith said. The possibility for art to create positive change is why Smith refers to his work as “artivism.” “A lot of times, people don’t feel like they have the right words to say, which is why they end up not saying anything or being silent. But they’ll say that they were able to at least share the piece to show that they were in solidarity with the cause for, and the fight for, Black lives.”

You may have seen Grace Owen’s chunky, squiggly letters that read: “If you are neutral in situations of injustice, you have chosen the side of the oppressor.” Since Owen, a digital advertising and visual communications student, posted it on May 27, the rendering of the Desmond Tutu quote—said in the context of South African apartheid—has been shared at least 500,000 times, including by accounts with millions of followers.

Owen’s design reads as a statement of solidarity, and sharing it has become a way to indicate that the social media users who repost it no longer want to remain silent. “A lot of people felt like this wasn’t their problem or they felt uncomfortable being vocal,” Owen told VICE. “The quote allowed them to recognize that this IS their problem and their responsibility, and if they choose to not use their platform, they are actively perpetuating and allowing injustice to happen. The shareability of it formed a sort of virtual protest.”

On Instagram, where art “is literally visual communication at its core,” Owen added, artists can help keep political momentum going. Art has become so important to the current situation that designers are now organizing to provide pro bono assistance for the Black Lives Matter movement. “Especially in the realm of racism and social injustice—a lot of people are uncomfortable talking about these issues, but when it’s presented in a way that is inviting, they’re a bit more willing to engage with it,” Owen said.

The sharing of Instagram posts as a form of political action has earned criticism, however informative they may be. Reposting a tribute portrait doesn’t necessarily mean that one has taken other steps to advocate for justice, just as sharing Tutu’s quote through Owen’s design can be a way of avoiding saying original words of your own. (Coleman pointed out, however, that her work about virtual protesting has been particularly resonant with people whose medical conditions prevent them from being in the streets.)

Instagram shares can read as the bare minimum: something that soothes otherwise apolitical users into feeling as though they’ve done something for the cause, and the criticism of performative activism is that it mostly helps an individual feel better, instead of pushing a movement forward. As #blackouttuesday made clear, social media activism can even have detrimental consequences. After millions of users posted black squares tagged with #blacklivesmatter, on-the-ground content from organizers and protestors was effectively silenced. While the intentions were good, the campaign spun out and hurt the work of the larger movement.

When people who don’t usually “get political” on social media suddenly join in, others may be quick to call their behavior “performative activism.” Psychotherapist Seerut K. Chawla describes the difference between acts of allyship motivated by optics, self-centering, virtue signaling, and peer pressure versus those of “authentic allyship.” That difference can be hard to discern, but that’s not the case when the information is packaged into an easy-to-parse, easy-to-share Instagram graphic. There is irony to be found in a highly stylized image carousel that shows “10 steps to non-optical allyship.”

But many participating artists are aware of this paradox. “If there’s not like any measurable results, then it’s hard for something to be considered, really, activism,” Smith said, when asked whether he sees sharing his art as a form of political action. Accompanying his portrait of Arbery, for example, he included an actionable step in the form of texting a number to add your name to a petition demanding justice. “Sharing is not the only thing you need to do. It’s gonna have to take steps that lead to measurable results and policy change.”

Coleman sees the argument about performative participation, and for her, that primarily applies to the statements from brands and corporations. As people share her work, she thinks many of them are participating further. “I realized it wasn’t performing when I started scrolling through the comments and saw the conversations that were happening,” Coleman said. “People are taking it upon themselves to respond to the comments to educate people.”

Even clearer to Coleman is the way social media has mobilized so many people around the same topic; her social media feeds were all Black Lives Matter last week, she said. Though each of our feeds is tailored by algorithms that push people into bubbles with others who share our views, the past two weeks have shown that a stunning number of people are on a similar page—or are moving toward uniting, both online and offline. Millennials are so often criticized for scrolling on our phones, Coleman said, but this proves that what we do on our phones can have power.

Armed driver barrels toward Seattle protesters, shooting one before surrendering to police