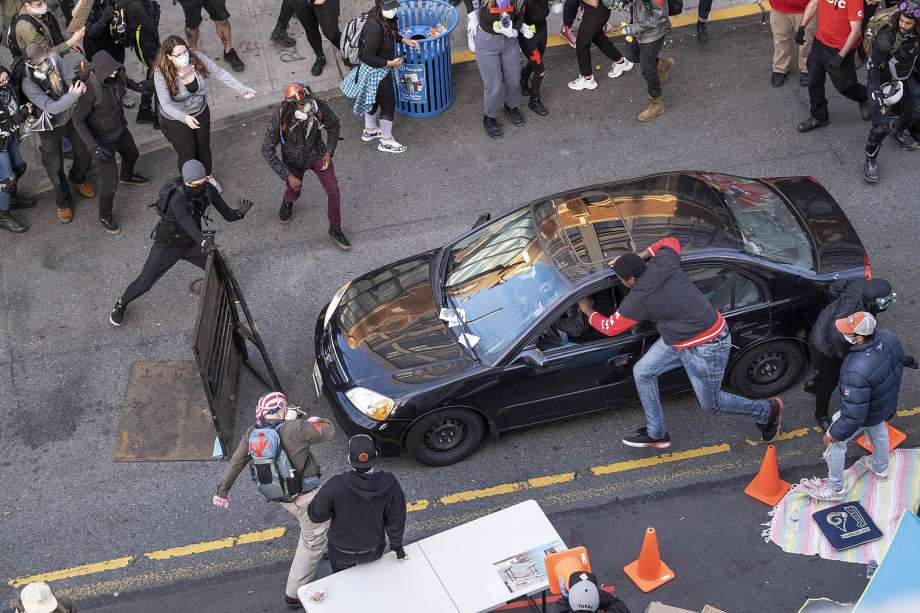 Armed driver barrels toward Seattle protesters, shooting one before surrendering to police

SEATTLE – Political leaders made moves Monday toward defunding the city’s police department in the aftermath of violence here over the weekend, following in the steps of other cities after nearly two weeks of protests over police brutality that have swept the nation.

The police department tear gassed protesters Sunday night, despite the mayor trying to previously limit its use. Earlier Sunday evening, a 27-year-old was shot by an armed driver barreling into a crowd of protesters.

Sunday marked the 10th consecutive day of protests in Seattle over police brutality, sparked by George Floyd’s death after a Minneapolis police officer dug his knee into his neck. Seattle police have come under fire for their tactics at the protests, leading Mayor Jenny Durkan, a Democrat, and Police Chief Carmen Best to say Sunday night that police have been too quick to use force rather than de-escalating conflicts. They ordered police to turn on body cameras during protests, which they were to start doing Monday.

Sunday night’s unrest, which also included police using tear gas even though Durkan called for a temporary ban on it in most circumstances, led the Seattle City Council to consider cutting funding for the city’s police department. Council member Teresa Mosqueda, who leads the council’s budget committee, called for an inquiry into halving the $400 million police budget and redirecting the funds toward “communities in which we’ve failed,” she said during a council briefing Monday.

Representatives for the mayor and the police department did not respond to a request for comment.

In her call for defunding the police, Mosqueda cited a new effort by nine members of the Minneapolis City Council, who announced plans Sunday to dismantle that city’s police department. Those councilmembers didn’t provide details of their plan, but called for a new public-safety system to be developed with community members.


Mosqueda’s calls follow a demand from Black Lives Matter Seattle-King County to decrease funding for police, and to spend more on health and social services.

Defunding calls are gaining momentum as proponents argue that past police reform efforts have failed. Rather than abandoning public-safety programs altogether, defunding advocates are often calling for policy changes that reduce reliance on law-enforcement officers, as well as a reallocation of policing budgets toward services such as health care and housing for black communities.

“This doesn’t mean there will not be police,” Mosqueda said in an interview after the briefing. But she believes reallocating funds to programs that provide affordable housing, child care and job training while “demilitarizing” police will ultimately lead to a safer community.

Mosqueda also cited a “vacuum of leadership” in Seattle, suggesting that Durkan reassess whether she should remain mayor. Regardless, Mosqueda said the city council is moving to assert greater authority as it looks into the police department’s budget.

Meanwhile, as the city rebounded from protests Sunday, the man who was shot, Daniel Gregory, was in “satisfactory” condition, said Tina Mankowski, a spokeswoman for Harborview Medical Center. He underwent surgery Monday morning for a fracture to his right arm from a gunshot wound.

The chaotic scene of the shooting unfolded just before 8:30 p.m. Sunday during what had been a peaceful protest near the Seattle Police Department’s East Precinct. Videos showed protesters appearing to chase after a black Honda Civic as it sped down the street toward a larger crowd, slowing just as it crashed into a metal barrier near an intersection.

Gregory caught up to the vehicle, video by the Seattle Times shows, and appeared to try to reach inside the driver-side window, when a shot was fired.

Gregory jolted backward, falling onto the pavement. Bystanders and medics rushed to his aid. The driver, who has not been identified by police, then exited the vehicle as the people who had just surrounded his car fled in all directions.

“He’s got a gun!” people screamed in video taken by a Seattle Times reporter.

The driver then headed toward the heart of the protest, where hundreds were gathered in the street. With nowhere to go, some raised their hands in the air. Some lay on the ground.

The man ran through the crowd toward the police line on the other side of the protesters.

Once he emerged from the crowd, he walked toward police with his hands in the air. He walked nearly all the way up to the police line before officers took him away, video of the arrest shows.

Video footage showed Gregory walking down the street with medics while raising his fist in the air. In one video by photojournalist Alex Garland, Gregory explained what happened while a medic applied pressure to his bleeding arm.

Protesters cheered for Gregory as he passed them in the street on his way to meet paramedics.

City leaders on Friday had banned the use of tear gas for 30 days except in life-threatening situations.

Early Monday, police again deployed a combination of tear gas, stun grenades and pepper spray, which they said were in response to people throwing projectiles. Police also said they saw someone with a gun, in a tweet justifying the use of tear gas. The department did not respond to a request for more details.

Plumes of smoke sent dozens of people running and screaming, rubbing their eyes, live-streamed video footage by activist Joey Wieser showed. Many remained despite dispersal orders from police, standing their ground from a distance as police fired tear gas and stun grenades, or flash-bangs, at them. A band even played in the street, creating a jovial, discordant soundtrack contrasting with the scene.

“Just got maced and gassed with hundreds others by Seattle police on 11th & Pine. With no provocation,” Sawant, who has called for Durkan’s resignation, wrote on Twitter. “All the movement was demanding was: Let us march! Shameful violence under Mayor Durkan. And the 30-day tear gas pause is totally meaningless.”

Before the attempts by police to clear the protests after midnight, some critics juxtaposed the police response to protesters with the officers’ seemingly calm reaction toward the suspect in the shooting who walked straight toward them.

“The person trying to commit vehicular homicide and who just moments earlier shot the man who stopped him is able to walk causally to the police line with a gun and gets politely escorted away,” Washington state Sen. Joe Nguyen (D) wrote on Twitter. “Yesterday people were flash bomber and pepper sprayed for touching the fence!”

What Would Happen If the Police Were Defunded or Abolished in the UK?

A Guide to Lead Generation and its Challenges

How to Keep Your Stress Levels Low