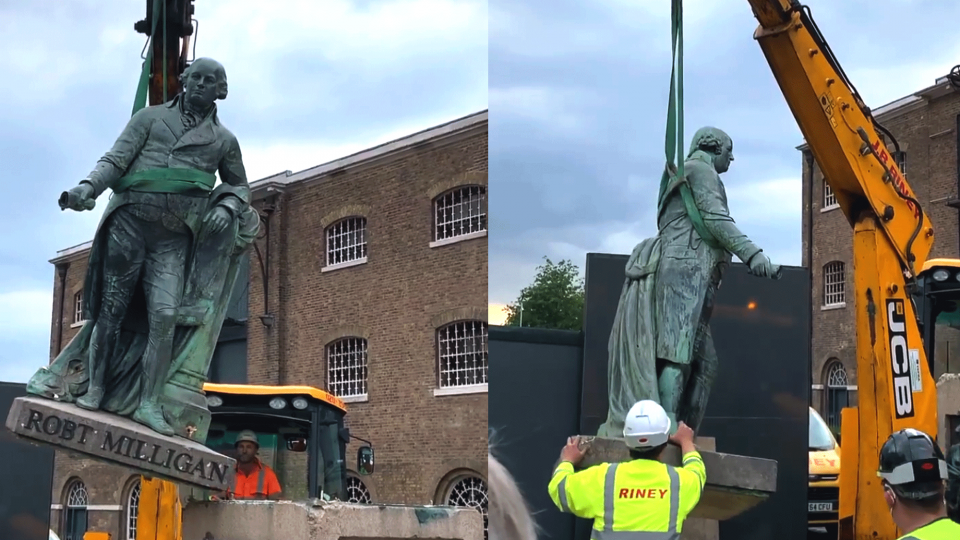 A statue of the 18th century Scottish slaver Robert Milligan was removed from its east London location this evening.

Following the toppling of the Edward Colston statue in Bristol on Sunday, and the removal of a statue of King Leopold II in Antwerp today, the Milligan monument was dismantled outside the Museum of London Docklands on the Isle of Dogs, to cheers from an assembled crowd.

On Monday, local Labour Councillor Ehtasham Haque started a petition calling for the statue’s removal, which received over 1,000 signatures within the first 24 hours. The same day, the statue’s head was covered with fabric and a Black Lives Matter sign was fixed to the plinth it was standing on. Haque said a protest would be held every day until the statue was taken down, adding: “The very existence of Robert Milligan’s statue to glorify slave trading in 2020 is an insult to humanity. Some enthusiastic resident has already covered the statue to honour the victims of racism and slavery.”

By Tuesday afternoon, the Canal and River Trust – which manages the land where the Milligan statue was located – tweeted that they were working to ensure its “safe removal as soon as possible”. At around 6PM today, builders arrived with a digger to begin the slow process of dismantling and removing the statue. At around 7:30PM, the statue was finally lifted from its plinth.

Outside the Museum of London Docklands, Haque said, “This is a milestone for us, and I feel liberated after having made this happen. I want to thank everyone who joined the campaign, and let’s keep pressing for a better society, to eradicate racism and injustice in this country and from anywhere in the world.”

Bow East Labour Councillor Amina Ali, who was also in attendance, said, “We know about the history of slavery. Places like Tower Hamlets have been built on slavery. Today, to finally see the statue pulled down is a victory to people of my ancestry. It’s a victory to sensible people in Britain, and it’s great that it’s happened. For me, today is a victory to all those black people whose ships pulled up on the shores here in the East End of London. It’s for them today that this statue has finally fallen.”

Milligan, a merchant and slave owner, was one of the founders of the London docks, built in the 18th century to trade slave-harvested goods. The year he died, it is thought that Milligan owned over 500 slaves across two sugar plantations in Jamaica. Campaigners have been calling for the removal of his statue for years.

Today, London Mayor Sadiq Khan tweeted, “Whilst it’s a sad truth that much of our city and nation’s wealth was derived from the slave trade – this does not have to be celebrated in our public spaces.” Mr Khan also announced a new commission “to review and improve the diversity of London’s public landmarks”. He didn’t specify which statues had been marked for removal, but did say a number of new memorials are planned, including ones for the Windrush generation, Stephen Lawrence, a National Slavery Museum or memorial and a National Sikh War Memorial.

Following anti-racism protests around the world, sparked by the police killing of George Floyd in Minneapolis, a number of campaigns have been launched calling for the removal of statues of slave owners throughout the UK. In Oxford, councillors and MPs have joined protesters to call for the removal of a statue of the British imperialist Cecil Rhodes from an Oxford University College, while the leader of Cardiff Council has said he supports the removal of a statue of the slave owner Sir Thomas Picton from the city’s civic building.