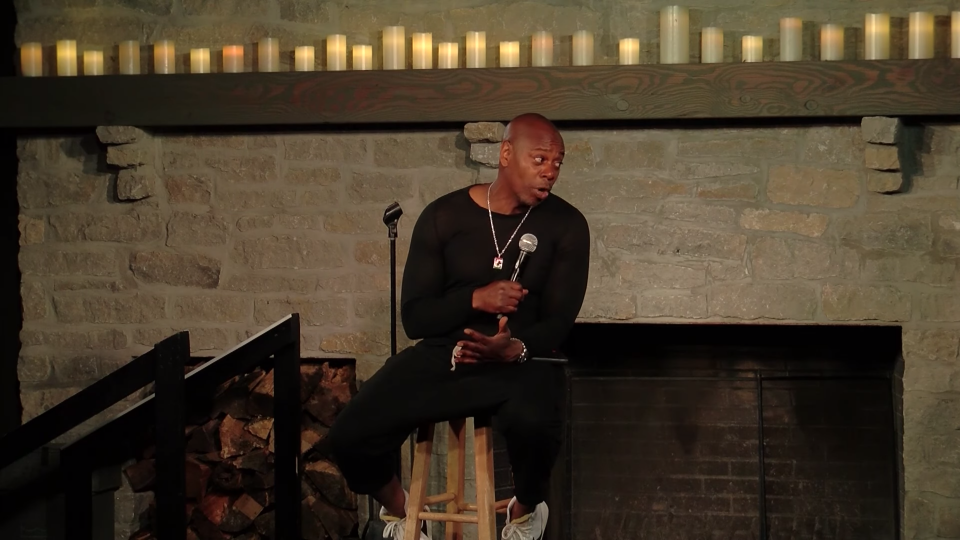 Shot on June 6, in Beavercreek, Ohio, the intro b-roll to Dave Chappelle’s new Netflix special ‘8:46’ shows guests in facemasks wearing the trademark Chappelle logo, in socially distant seating arrangements. The man of the hour shows up in all black, with his Chappelle logo chain glimmering around his neck.

One of the best comics in the world addresses a sparse and masked crowd, making the recording feel like part comedy special, part emergency dispatch to a country that forgot to hit snooze on the reckoning it’s been putting off. It was shot less than two weeks after George Floyd was killed by Minneapolis police, sparking national protests, protests that Chappelle acknowledges and encourages. The special is heartfelt, and not lacking humor, but Chappelle also addresses America’s history of violence against Black people without attempting for a punchline every time.

‘Normally I wouldn’t show you something so unrefined, I hope you understand,” reads a note from Chappelle on YouTube. A text overlay in the special says it’s been 87 days since the comedian has performed on stage. This number does not appear to be significant, but there are many more important references to numerology that follow. He tells the crowd it’s the first concert in North America since “all of this shit” happened, and for that reason, “like it or not, it’s history. It’s gonna be in the books.”

These caveats are unnecessary; perhaps the only tell that these are not polished bits, is the presence of a black notebook that Chappelle glances at sporadically. It is extremely strong performance and flex of influence. Chappelle performed a 27-minute set at an outdoor venue in Beavercreek, Ohio, on June 6, and Netflix broadcast it, for free, on Instagram and YouTube, five days later.

If Chappelle gained any rightwing fans for his previous fascination with jokes at the LGBTQ community’s expense, they’re likely to peel off his wagon after this special. In 8:46, Chappelle calls out Candace Owens and Laura Ingraham by name, as well as the NRA. (One bit that would’ve resonated, that an ABC producer found in the subtitles, is a personal swipe at Don Lemon.) And the majority of the performance is spent talking about topic of police; Chappelle’s own life has a number of chilling instances of coincidental proximity to Black death; for example, he was born at 8:46 a.m., and George Floyd was choked by the knee of cop Derek Chauvin for 8 minutes and 46 seconds. This on its own is perhaps not remarkable, but it is not the only numerical connection that Chappelle draws to both historical and recent events. Chappelle also notes he was pulled over by Sean Williams on August 4, 2014, the day before Williams shot and killed John Crawford III in a Beavercreek Wal-Mart.

In ‘8:46,’ the live wire that Chappelle grabs is acts of violence committed by Black former cops and military members, involving police officers on the victim end. In another case of accidental proximity, he reminds the audience of Chris Dorner, the former LAPD officer who went on a cop killing spree, who was fired from the force after attempting to report a white officer for using excessive force on a suspect. In the 18 page manifesto, which covers Dorner’s own experience with racism within the LAPD, and how the “Blue Line” prevents racism from being excised from its ranks, Dorner also mentions Dave Chappelle by name, among a larger list of comedians that he calls “pure geniuses.”

Rare for a Chappelle performance, the line that echoes the most is not a joke. With an angered clarity in his voice, says, “What are you signifying that you can kneel on a man’s neck for eight minutes and 46 seconds and feel like you wouldn’t get the wrath of God? That’s what is happening right now. It’s not for a single cop. It’s for all of it. Fucking all of it.”

4 Ways to Help Care for Your Elderly Relatives

Medication Errors: How to Avoid Them in Nursing