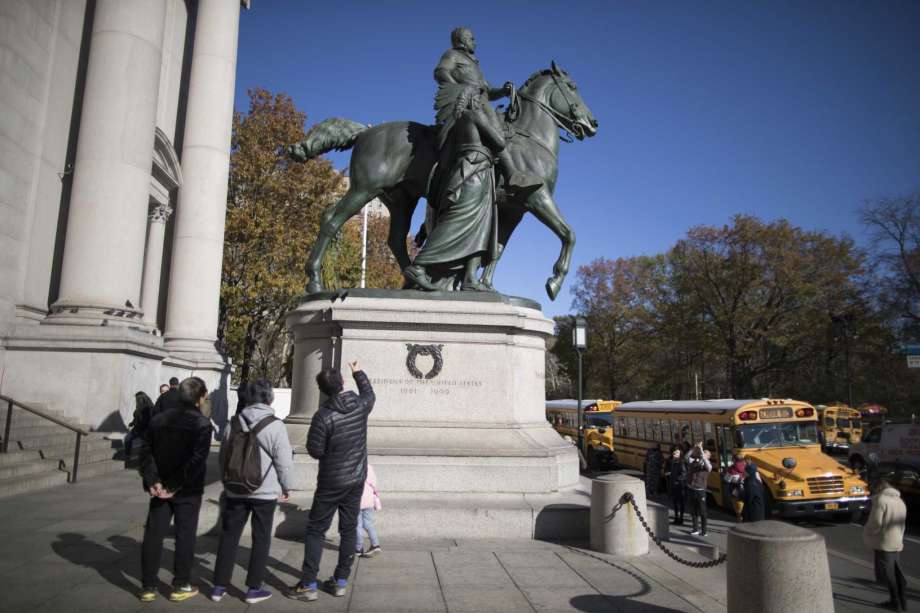 For decades, a hulking bronze statue of President Theodore Roosevelt atop a horse, flanked by Native American and African men on foot, has greeted visitors at the entrance of the American Museum of Natural History in New York.

The roles of the two nameless men have provoked debate and protests for years, as critics said they appeared subservient to the powerful white man, creating an unmistakable portrait of racial hierarchy and colonialism.

Now, the museum said the time has come to take down the statue of the 26th president.

On Sunday, the museum announced that it had the permission of New York City – along with the blessing of Roosevelt’s great-grandson – to remove the Equestrian Statue of Theodore Roosevelt, as it’s formally known. New York City owns the statue and the property on which it was built in 1940.

“The American Museum of Natural History has asked to remove the Theodore Roosevelt statue because it explicitly depicts Black and Indigenous people as subjugated and racially inferior,” Mayor Bill de Blasio, D, said in a statement. “The City supports the Museum’s request. It is the right decision and the right time to remove this problematic statue.”

President Trump, though, called the move “ridiculous” on Twitter early Monday morning, pleading, “Don’t do it!”

The museum’s leadership said in a statement that it was “profoundly moved” by the national reckoning over racial injustice following the killing of George Floyd, an unarmed black man, in police custody and has “watched as the attention of the world and the country has increasingly turned to statues and monuments as powerful and hurtful symbols of systemic racism.” Statues of Confederate leaders, Christopher Columbus and professional sports teams with racist histories have been among the casualties. Statues of George Washington and Thomas Jefferson, among the slave-owning presidents, have been set ablaze, vandalized or torn down by protesters in some places.

In this case, the museum’s leadership made clear that it is not specifically targeting Roosevelt but rather the overall makeup of the statue, saying that “many of us find its depictions of the Native American and African figures and their placement in the monument racist.”

“As we strive to advance our institution’s, our City’s, and our country’s passionate quest for racial justice, we believe that removing the Statue will be a symbol of progress and of our commitment to build and sustain an inclusive and equitable Museum community and broader society,” the museum’s president, Ellen Futter, said in a statement.


Roosevelt’s great-grandson Theodore Roosevelt IV, who sits on the museum’s board of trustees, said the statue’s composition conflicts with his great-grandfather’s legacy.

“The world does not need statues, relics of another age, that reflect neither the values of the person they intend to honor nor the values of equality and justice,” Roosevelt, who is the managing director at Barclays Capital, said in a statement. “The composition of the Equestrian Statue does not reflect Theodore Roosevelt’s legacy. It is time to move the Statue and move forward.”

The Roosevelt family has been closely involved with the museum since its inception in the late 19th century. President Roosevelt’s father, Theodore Roosevelt Sr., was among its founding members. The New York state legislature voted in 1920 to make the museum the site of a memorial to President Roosevelt, who also was a former New York governor and whose legacy has been in part defined by his commitment to conservation and the creation of the national park system.

Protests over the statue escalated after the deadly Unite the Right rally in Charlottesville in 2017, as national pressure mounted to reevaluate monuments condemned as racially offensive. In October 2017, a group called the Monument Removal Brigade claimed responsibility for splashing red liquid or paint at the base of the Roosevelt statue, saying the monument represented “patriarchy, white supremacy and settler-colonialism.”

New York City developed a commission to evaluate whether the Roosevelt statue, along with several others, should come down. But the commission was divided about Roosevelt, split on whether to relocate it, add more historical context or do more research to understand what the sculptor intended.

The museum instead created its own exhibit to address the questions and criticism. In an exhibit video, Harriet F. Senie, a public art historian at the City College of New York, said that the sculptor intended the African man and the Native American man as “allegorical figures” representing the guides Roosevelt would have encountered on the continents where he went hunting.

“The allegorical figures, and these are [sculptor James Earle] Fraser’s words, may stand for ‘Roosevelt’s friendliness to all races,’ ” Senie said in the video.

Others saw something else – “a narrative of domestication” and conquest, Mabel O. Wilson, a professor of architecture and African American studies at Columbia University, said in the exhibit.

Critics also pointed to Roosevelt’s views on race, a complicated legacy. He was the first president to invite an African American, Booker T. Washington, to dine at the White House. He pushed for a “square deal” for people of all races and classes, supporting unions while cracking down on monopolies. Yet he also believed in the superiority of white, Western culture and supported the eugenics movement – as did the American Museum of Natural History in the 1920s and 1930s, when it held two international eugenics conferences.

Philip Deloria, a Harvard history professor of Dakota descent, said in the exhibit that he would not consider Roosevelt a “friend of the Indian.” Although Roosevelt was celebrated for his conservationism, the lands he conserved had often belonged to Native Americans, Deloria said, causing “devastating consequences for Indian people.”

Before becoming president, Roosevelt wrote enthusiastically of conquering the “squalid savages” on the Western frontier, saying the settlers and pioneers “have justice on their side,” in his 1889 book, “The Winning of the West.”

“When you read some of his writings, you cringe because it has such a feeling of white supremacy,” Douglas Brinkley, a history professor at Rice University, said in the museum exhibit. “It shows a portrait of somebody feeling that tribal people of Africa are not very high on his Darwinian scale.”

Critics of the monument said it was difficult not to view the statue’s composition within the context of Roosevelt’s and the museum’s views on racial hierarchy in that era.

For now, it’s unclear where the statue will be relocated. In the meantime, the museum said it will rename its Hall of Biodiversity for Roosevelt “in recognition of his conservation legacy.”