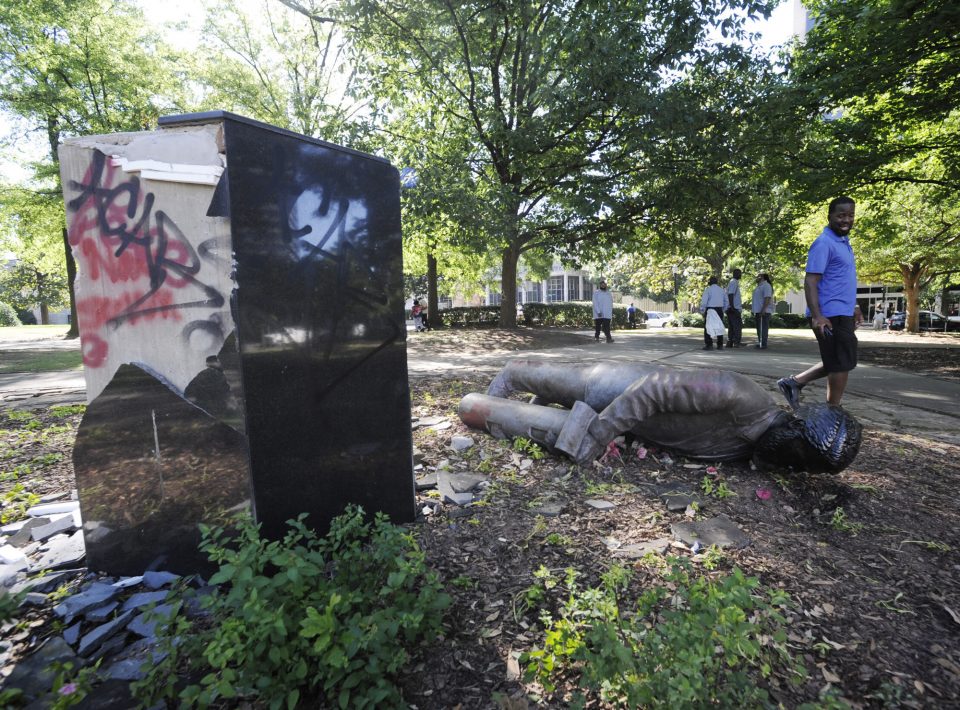 If you happen to be a statue honoring a Confederate general or a European slave trader, you might want to watch your back — or your head — for the foreseeable future.

Last night, Christopher Columbus statues in two separate American cities were destroyed. In Richmond, Virginia, protesters tore down a Columbus statue, set it on fire, and then dumped it into a lake.

Roughly eight hours away in Boston, meanwhile, a separate Columbus statue located in the city’s North End was beheaded overnight.

Last night has been part of a larger trend of protesters taking it upon themselves to remove racist statues, in the wake of uprisings against police brutality that have gone global over the past two weeks. All over the United States and Europe, protesters are tearing them down. Here are some of the most notable:

On June 2, protesters in removed a statue of the Confederate general from the grounds of a high school which bears his name in Montgomery, a city that played a pivotal role in the Civil Rights Movement and remains a majority-Black city to this day.

Four protesters, all of whom are Black, were charged with felonies for allegedly bringing down the statue. The charges were later dropped, reportedly due to errors in the filing document, but could be refiled at a later date. Since then, alumni of the school and activists have renewed calls for Montgomery Public Schools to rename the high school and other schools named after Confederate leaders.

“I think currently in 2020 those names do not represent the kind of positive things our students are hopefully exposed to on a day to day basis,” MPS superintendent Dr. Ann Roy Moore told Montgomery TV station WSFA on Tuesday.

A statue of white supremacist newspaper publisher and politician Edward Carmack, who wrote pro-lynching editorials and incited a racist mob to burn the office of pioneering journalist Ida B. Wells’ Memphis newspaper in the 19th and early 20th century, was torn down on May 30 during the first weekend of protests. This week, the state of Tennessee said it would replace the Carmack statue.

Interestingly, it wasn’t Carmack’s embrace and defense of white supremacy that got him a statue in the first place, but rather his support for Prohibition. (In the Jim Crow South, however, the racism couldn’t have hurt his cause.)

A statue honoring Charles Linn, a Confederate naval officer, stood in a park that’s also named after him until March 31, when protesters tore it down.

Afterwards, Birmingham mayor Randall Woodfin ordered the removal of the city’s Confederate monument despite the threat of a lawsuit from the state attorney general, saying that it was “probably better for this city to pay this [$25,000] fine than to have more civil unrest.”

While it’s been overshadowed by the bath given to the Columbus statue and ongoing efforts to take down more prominent Confederate monuments around the city, the statue honoring this Confederate general in the old Confederate capital was taken down by protesters last weekend. It’s since been moved to storage, according to the Richmond Times-Dispatch.

No one’s going to miss this one: in 2017, two brothers and descendants of Wickham called for the removal of the statue of their long-dead relative, according to the Times-Dispatch.

It’s not just in America, either — over the weekend, protesters in the town of Bristol tore down a statue memorializing this 17th century slave trader who helped build the city, then dragged it all the way to the harbor and dumped it in. Video of the incident went viral.

Cover: An unidentified man walks past a toppled statue of Charles Linn, a city founder who was in the Confederate Navy, in Birmingham, Ala., on Monday, June 1, 2020, following a night of unrest. People shattered windows, set fires and damaged monuments in a downtown park after a protest against the death of George Floyd. Floyd died after being restrained by Minneapolis police officers on May 25. (AP Photo/Jay Reeves)

What Would Happen If the Police Were Defunded or Abolished in the UK?

How to Make Your Home Cozy Before Winter