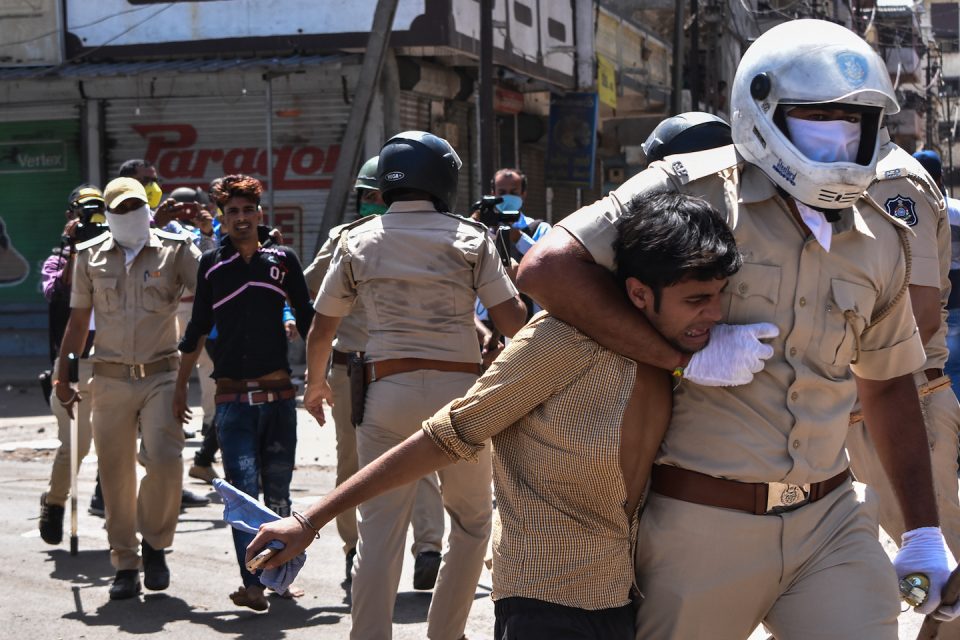 Over the weekend, social media feeds in India were flooded with illustrated quotes of Desmond Tutu that declared “If you are neutral in situations of injustice, you have chosen the side of the oppressor”, poignant protest signs that declared “I can’t breathe”, and the quintessential hashtag #BlackLivesMatter. The posts expressed solidarity with George Floyd, a Black man who died after a police officer kneeled on his neck for 8 minutes and 46 seconds. The incident has sparked demonstrations against police brutality and racism around the world.

This outpouring of support in India would have ordinarily been touching. Yet many couldn’t help but notice that the very voices – who now claim to be infuriated by police brutality, systematic oppression and murder on the basis of arbitrary factors like skin colour – were the same ones who were blissfully silent when similar human rights violations happened in the country. Many feigned ignorance and apathy when critics pointed out that police forces in India target university students and Dalit rights activists. Others stand in solidarity with an American-born movement against oppression, while choosing to overlook the all too frequent religion-based violence and riots that have taken place in India.

Enraged citizens were quick to call out this selective outrage and question the influencers and celebrities expressing outrage as being “performative woke” and “hypocritical”. These accusations were then immediately dismissed with: “You can’t tell me what to care about”.

But the incident begs the question: Why don’t Indians care about the same struggles so many of their countrymen are facing? Why do Indians, who are infuriated with racism and police brutality in the U.S., not feel that kind of rage for the same issues in their own country?

“We have a deep-seated history of slavery, thousands of years of caste-based differentiation and several decades of violent Hindu-Muslim rivalry that aren’t easy to unlearn,” said Vikram Patel, a psychiatrist, social researcher and founder of Sangath, an organisation dedicated to child development and mental health in low-resource settings. “There’s still a lot of social engineering required to make our society more inclusive of its diversity. This has a direct impact on children’s views while growing up when their families, which might be biased (by historical context that is casteist or anti-Muslim), impose unacceptable and inhumane prejudice on impressionable minds.”

Patel points out that like most societies that have a colonial history, Indians tend to have this fascination with the West and model their societies around it, without taking into account cultural differences. “A simple example of this is with lockdowns. We saw many countries in the West doing it, so we decided to adapt that model without implementing social security systems and giving cash payments to the struggling sections of society, or analysing how dependent our people are on public transportation,” said Patel.

Patel pointed out an interesting dichotomy between this skewed way of viewing the West. Indians like to blame “Western values” for acts of cruelty, but when someone in the U.S. questions problematic behaviour in India, citizens become nationalistic and try to justify their actions, instead of realising that they must fix the problems in their homes before trying to do so globally.

Many experts also highlight the power of mainstream media in influencing such movements, and how they sometimes set narratives that work more like propaganda.

Sharma cited what many other critics do: that the portrayal of police in films and popular shows like Crime Patrol or Savdhaan India (which dramatise real-life crime cases) also tends to glorify cops as the ultimate good guys, making it harder for people to understand the severity of living in a police state. “Meanwhile, there’s an invisibilisation of caste and religion, sometimes even a vilification propagated by biased news channels. This creates a negative image of left-oriented organisations and student protests,” he said.

He explained that biased media portrayals can then convert images of injustice into separatist movements that target the oppressed and make them out to be terrorists. “The problem is that this popular media sets the narrative that is replicated and regurgitated by people on platforms like Twitter and WhatsApp.” He also stressed how this can spill over into elections of public officials, and eliminate any options that don’t take populist or extremist stands that reflect sentiments of the majority.

Sharma said that the populist narrative then affects the topics that celebrities speak up about. “It’s much easier for a celebrity to speak out against white supremacy than against Hindu supremacy, because you can’t call out the very people your career and social status is dependent on,” he said. He gave the examples of Indian actors like Aamir Khan, Shah Rukh Khan and Deepika Padukone having had to face social boycotts after speaking out on sensitive topics that criticised the right-wing.

“It’s not hypocrisy as much as it is marketing. They (celebrities who were silent but are now speaking up in solidarity with the Black Lives Matters movement) are looking at who constitutes the majority or who has the zeitgeist right now. Currently, the zeitgeist around the world is anti-government and anti-police, so they are swayed by it because it sells their personal brand.”

While celebrities’ actions can be attributed to a desire for public validation, a different kind of attitude defines the actions of ordinary citizens who display the same apathy. Sharma believes that a layperson who has raised their voice against racism and police brutality in the U.S. but has stayed silent when the same issues have permeated Indian society is probably driven by a kind of superiority complex.

He explained how this creates a chasm defined by the “ingroup”, which is the social group these people relate to, and an “outgroup”, which is a group they aren’t a part of. In this case, the American government is viewed as an outgroup, and the same actions are criticised to make people feel like they are better off in their own country. “It helps us reduce some of the dissonance we feel about some of our actions,” said Sharma.

According to him, citizens who want to justify why they have voted for an ineffective government or the problematic things their ministers say, will do so by criticising another government. “We’re basically saying, look, we might have it bad but you have it worse. And when we criticise somebody who is not from our cultural context, we are essentially saying the ingroup is better than the outgroup.”

Indeed, there’s value in questioning the origins of anti-Blackness, as it can lead to the application of those politics to Indian narratives. “For South Asians specifically, challenging anti-Blackness cannot be discussed without examining casteism in our communities,” said Sharmin Hossain, the political director at Equality Labs.

“Although caste and race are distinct and separate social categories, caste has divided South Asian society into units of graded inequality. By examining caste privilege, South Asians can interrogate the underlying logic of anti-Blackness, and find new language to raise the consciousness of our communities,” Hossain said.

“We also have to reframe the conversation around police brutality and take it beyond anti-Blackness. The Movement for Black Lives struggle is not only about the end to police brutality, it is a multi-faceted strategy to change our communities – from divesting in police and military, to safer communities nourished with resources and social safety nets.”

This article originally appeared on VICE IN.

8:46: A number becomes a potent symbol of police brutality