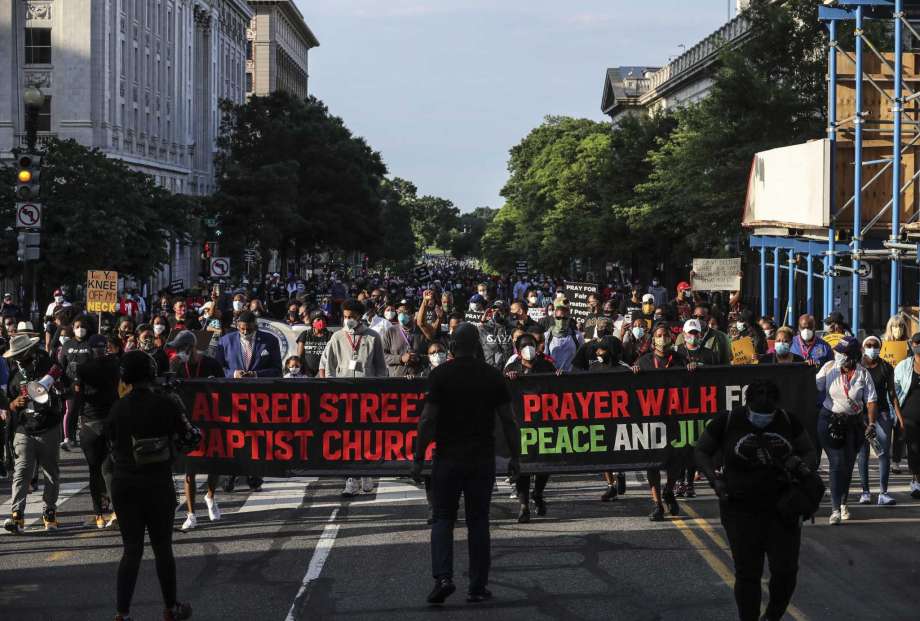 
Photo: Photo For The Washington Post By Oliver Contreras

Photo: Photo For The Washington Post By Oliver Contreras

WASHINGTON – Black Lives Matter Plaza was turned into a church Sunday morning, with thousands of mostly African American churchgoers praying, protesting and dancing near the White House after marching from the National Museum of African American History and Culture.

The prayer march, vigil and rally were organized by regional NAACP branches and Alexandria’s historic Alfred Street Baptist Church, which has roots in the time of Thomas Jefferson’s presidency.

It was one of the largest faith-based events in the more than two weeks of protests that have consumed the nation’s capital since George Floyd was killed by a Minneapolis police officer in May, and it was the first big public event organized by black clergy. Organizers said that was due to extra caution in the African American community, which has been hit especially hard by the coronavirus pandemic.

“Mask Required! Safe Social Distancing Enforced,” organizers instructed beforehand, and the march and rally were patrolled by marshals monitoring safety. Demonstrators were spaced out in rows, and organizers frequently paused the flow of marchers to keep buffers between them. People bunched up in places, but for the most part wore masks, including many with African-style patterns.

Alfred Street Pastor Howard-John Wesley said he and other clergy were also waiting for an event infused with prayer – and safety. The Trump administration forcibly removed protesters from the area near Lafayette Square on June 1, ahead of President Donald Trump’s photo opportunity at a historic church. On Sunday, that show of federal force was replaced with prayer.

“We were waiting for a call for something not just incensed with anger but something that integrated our faith,” Wesley said. “We wanted to carve out something safe for teens – I was scared to let them come downtown. We wanted to teach them about protesting peacefully.”

And on Sunday that is what they found.

“It’s not rage or anger. God is here and that’s hopeful,” he said.

Many marchers taking part in what was organized as a “prayer walk” emphasized the need for activism steeped in prayer. They cited the famous scripture from the Book of James: “Faith without works is dead.”

Walking up 15th Street NW, they paused at stations where people could pause to pray – for “affordable health care,” for “victims of police brutality,” for “the courage to speak truth to power.” They also chanted the names of people killed by police and spoke of daily affronts.

Carrie Haley, carrying a sign that read “Always pray,” said she was overwhelmed by the “unconscious bias and microaggressions” she often faces.

She believes the brutality of the video that captured Floyd’s final minutes, the length of time he lay beneath the officer’s knee, have changed things. “This is different – when you see corporations speaking out, the NFL commissioner saying he was wrong … that tells me people are listening,” Haley said.

The marchers flowed into the newly named Black Lives Matter Plaza, filling 16th Street from Lafayette Square to K Street, and Wesley gave his sermon with the White House as a backdrop.

“We pray you would poke and prick the hearts of this nation,” Wesley prayed, as a few thousand marchers knelt or touched their foreheads to the ground in prayer.

When the marchers got to the Plaza, organizers boomed from the speakers: “Helicopter arms! Space out! If you’re touching someone you’re too close!”

The march and prayer rally had a focused and yet optimistic feel, some said, compared to two weeks ago, when many felt nothing but anger. Some said they were encouraged to see legislation coming forward to reform policing.

“If you asked me two weeks ago if Confederate statues would start being torn out of the ground and our system, I would have never have believed it,” said Christian Bentley, 33, who lives in Alexandria and works in marketing and mental health. “To see people listening – it’s amazing that in 2020 America is ready to hear the black experience,”

Bentley marched carrying a small, wooden cross of a black Jesus, carved by the black Catholic order of Josephite brothers. In the same hand he held his rosary beads.

Demonstrators later danced to the music of Public Enemy in the plaza.

Protests continued around the country throughout the weekend, with demonstrators demanding far-reaching police reforms. Police in Richmond said they were investigating an incident from Thursday night in which a police vehicle appeared to strike protesters near the Monument Avenue statue of Robert E. Lee.

A video posted on social media showed protesters on bikes and on foot standing in front of a police SUV and preventing it from moving forward around 9:30 p.m. The vehicle then backed up and pulled onto a curb and grassy area to try to go around them, but the protesters moved over.

The police vehicle pushed through the crowd and seemed to strike one or more people before it broke free and drove away.

The Richmond Police Department issued tweets shortly after midnight saying it was “currently investigating a possible assault on an officer inside the vehicle as well as reports on social media that a person in the crowd may have been struck by the vehicle.”

Videos on social media showed no evidence of someone attacking an officer inside the vehicle, though protesters appear to throw something at the car as it is pulling away. Local activists have reacted with outrage, pointing out that on June 1, Richmond police similarly tried to blame protesters for provoking a tear gas attack before having to apologize and admit that officers gassed a peaceful crowd.

Richmond Mayor Levar Stoney and Chief William Smith have said that the earlier incident, which also happened near the Lee statue, is under investigation and that disciplinary action will be taken, though they have provided no specifics.

The Washington Post’s Gregory S. Schneider contributed to this report.