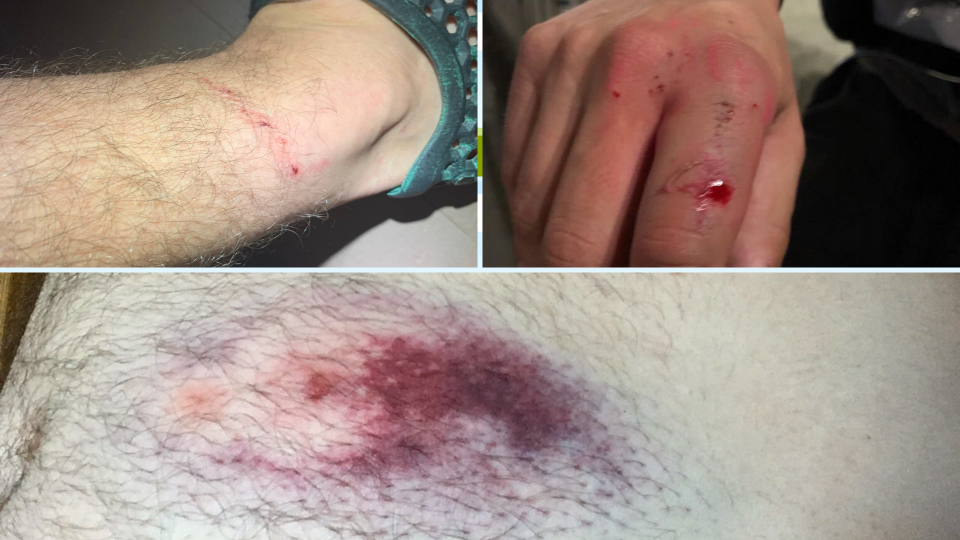 PORTLAND — On Saturday, Jonny B. did what he’s done almost every night since late May: hop on his bicycle and ride from his North Portland home downtown to protest. Hours later, he was shot with a pepper ball just inches from his groin. Two others hit him in the chest, another hit him in the ankle.

“I’m standing right on the sidewalk,” said Jonny, who declined to give his full last name for fear of retaliation. He said someone in the crowd of demonstrators and journalists threw a water bottle at law enforcement agents, who then blanketed the area in tear gas. One canister landed at his feet. “I go to kick the canister away from me, and that’s when they started unloading the pepper balls.”

Ever since protests over the deaths of George Floyd and Breonna Taylor started in May, police departments across the country have used tear gas and impact munitions to disperse demonstrators. But over the last week-and-a-half in Portland, federal agents from the Department of Homeland Security and the U.S. Marshals Service have added to the violence — firing on crowds of protesters and journalists with a range of potentially life-threatening munitions, including rubber bullets and marking rounds. Several protesters have been hospitalized.

What’s more, no federal law specifically requires federal agents to wear identifying badges. That makes them nearly impossible to identify, and thus, held accountable if their use of force is outside of what the law allows.

“I haven’t seen — and I’ve been looking for them — any ID numbers,” Jonny said of federal agents’ uniforms. “Definitely no nameplates. They’re working as anonymously as they can.”

“It’s difficult to know who to sue because no one is identifying themselves and what agency they are with,” said Portland-based lawyer Beth Creighton, who’s representing independent journalists Chris Elia and Leslie McCam in a lawsuit against the city and other actors. “The police are saying, ‘Oh we don’t want to be named because we don’t want to be doxxed.’ But they’re also not being held accountable.”

“It’s been horrific. It’s been like nothing I’ve ever seen.”

Despite the difficulty of identifying individual officers and distinguishing different agencies, lawsuits are piling up.

The American Civil Liberties Union (ACLU) has also jumped into the legal fight. The ACLU of Oregon and a partner law firm won a restraining order against the Portland Police Bureau (PPB) and the City of Portland on behalf of a group of journalists and legal observers to stop the police from arresting or otherwise harassing their clients. The organization has now added the federal agencies acting in Portland to its suit, as well.

ACLU co-counsel Matthew Borden argued that officers are targeting journalists deliberately and called the situation a “constitutional crisis of the highest order.”

“It’s been horrific,” he said. “It’s been like nothing I’ve ever seen.”

The U.S. Department of Justice office of the Inspector General has also opened an investigation into what happened to Donovan LaBella last Sunday, when a deputy U.S. Marshal shot the 26-year-old protester in the head with an impact munition and fractured his skull. He underwent facial reconstructive surgery hours after the shooting and is now recovering at a local hospital.

But that investigation hasn’t stopped law enforcement from using those munitions in excessive force. On Monday night, Maureen Haley, chair of the history department at Lewis & Clark College, was shot just above the eye with a similar impact munition while peacefully protesting with a family member downtown. Haley went to the hospital to treat her wound.

In addition to peaceful protesters, a number of journalists have also been hit.

Independent reporter Jake Johnson, 33, decided to begin filming the downtown protests only after seeing fellow Portland journalists arrested by Portland Police Bureau (PPB) officers. While out with his camera on Sunday night, he was hit with an impact munition in the stomach, just below the rib cage.

“I’m walking on the path in Chapman [Square] sort of towards the corner, pretty slowly,” Johnson said. “I’ve got my camera, I’ve got my helmet, which is pretty clearly labeled press on the front, back, and top, and then, all of the sudden, out of the blue, they shoot me.”

Just hours after Johnson was shot on Sunday night, freelance journalist Donovan Farley was hit with a non-lethal bullet and tweeted that he left the scene of the protest because he was struggling to breathe.

Jungho Kim, a freelance photographer from San Francisco who arrived in Portland to document the protests, was also hit directly in the chest on Sunday night despite wearing a neon vest clearly labeled “PRESS.” Gabriel Trumbly, a U.S. Army veteran who has worked as a photographer with the Portland chapter of the National Lawyers Guild was also hit with a non-lethal munition on Sunday night in his hand.

The federal intervention in Portland — over the objections of Wheeler and Oregon Gov. Kate Brown — has terrified the nation. But those on the ground are quick to make clear that the conduct of federal officers in the city is simply a progression of the tactics used against protesters and journalists by the city police force — which is now, by all appearances, cooperating with the federal agents.

“What I’m seeing is blatant, excessive abuse of force,” Jonny said. “Sure, I’m seeing a little bit of petty vandalism — graffiti, broken windows, that kind of stuff. But that is being returned from state forces with physical violence, causing people to go to the hospital, causing people to bleed, causing people real threat[s] to their lives. For me, that is unjustifiable.”

The ACLU’s next motion will be heard on Thursday. In the meantime, the protests — contrary to what President Donald Trump says — are picking up steam. Tuesday night’s demonstration was the biggest in weeks, with a group of mothers linking arms, leading the crowd in song, and chanting “fuck the police.”