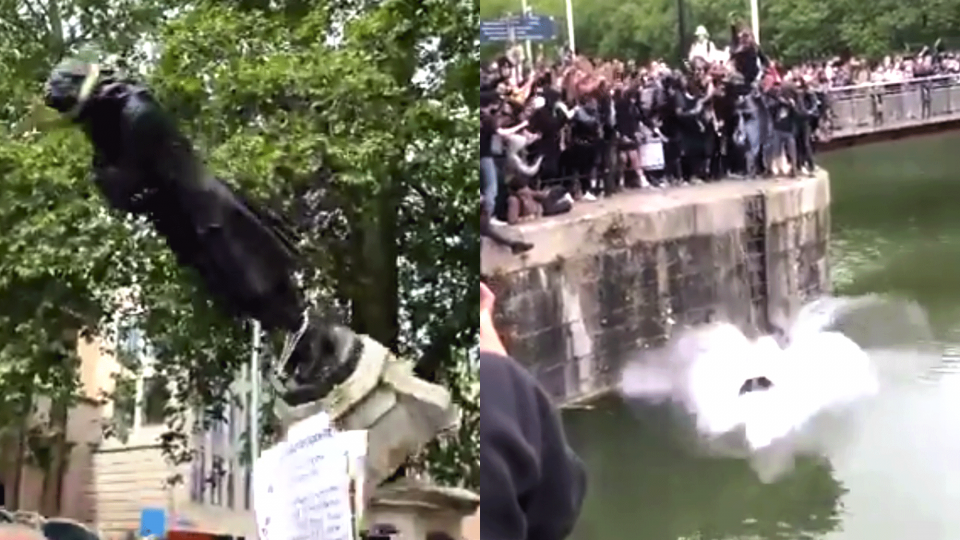 Black Lives Matter protesters in Bristol have toppled a statue of 17th century slave trader Edward Colston and rolled it into Bristol Harbour.

The Colston statue has long been a controversial and much-hated monument in the city, with Bristol West MP Thangam Debbonaire calling for its removal in 2018. It stood on Colston Avenue – a street also named after the slave trader – in the city centre.

Protesters pulled the statue down on Sunday afternoon during the Black Lives Matter demonstration in the city, to a chorus of cheers. The statue was subsequently rolled towards the harbour and pushed into the water.

The official Twitter account for Momentum Bristol posted footage of the statue being dumped into the harbour, with the words: “Bye bye Edward Colston! If anyone misses this statue they need to have a long hard think about their priorities. Slave traders are not heroes!”

Colston built his immense wealth through slavery as a member of the Royal African Company, eventually becoming its deputy governor in 1680. Slaves in West Africa were branded with the initials of his company and pushed onto ships bound for the Americas. It is believed that some 84,000 men, women and children were trafficked this way, with 10 to 20 percent of dying on the route.

Before his death, Colston bequeathed his vast fortune to his home city of Bristol, and his name marks many buildings, streets and monuments. Massive Attack famously boycotted Colston Hall due to its name, and it will reopen later this year under a new name.

The now-toppled statue made no mention of Colston’s slave trader past. In 2019, efforts to commission a plaque that rectified this were scrapped after its wording was criticised for watering down his involvement in slavery.

Bristol residents have treated the statue with disgust and anger for decades. Over the years, it has been graffitied with the words “Slave Trader” and defaced with white paint, a ball and chain, and a traffic cone. A recent petition calling for its removal attracted 7,000 signatures.

The Black Lives Matter protest in Bristol was organised in solidarity with the George Floyd protests in the US.

How Trump’s Secret Police Are Going After Portland Protesters