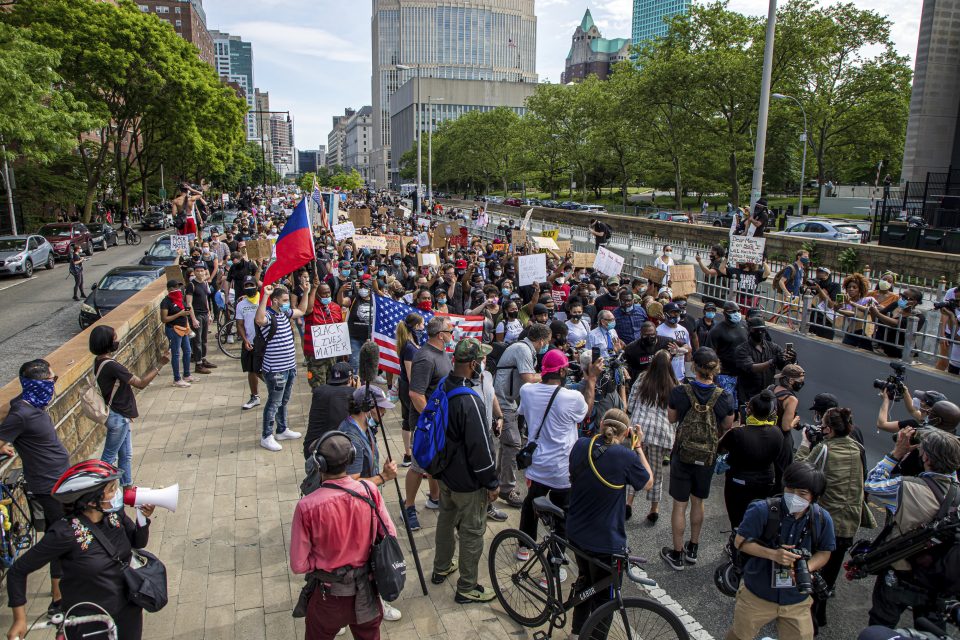 The New York Police Department arrested white and Black people by the hundreds at the height of the city’s Black Lives Matter protests, but the two groups often faced radically different fates in the criminal justice system.

White people made up about 44% of the 2,000-plus total arrests that occurred in connection to the protests between May 28 and June 7, according to data released Wednesday by the New York state’s Office of the Attorney General. Black people made up about 39%. But while 16% of the Black arrestees ended up being charged with a felony, just about 3% of arrested white people faced similar charges.

Latinx people made up about 13% of the total arrests. Nearly 8% of those arrestees were charged with felonies.

This new data backs up a June report by VICE News that found that Black and brown were already being punished more severely than white people for joining the demonstrations, according to accounts from public defenders and protesters. One public defender’s organization in Manhattan found that, between May 29 and June 6, just 5% of the 72 people it had arraigned in what the organization called “protest-related cases” were white.

Arraignments don’t always involve felony charges, and not every person charged with a felony ends up getting held for an arraignment; they can also be released with what’s known as a “desk appearance ticket,” or a request to come back to court at a later date to kick off a criminal case. But almost 70% of those 72 arraignments involved charges for burglary in the third degree, a nonviolent felony that carries a maximum sentence of seven years in prison.

“The only folks who were being held were the kids of color, who were being charged with these ridiculous, trumped-up felony cases. And that was just really, really enraging,” Jessica Heyman told VICE News at the time. Heyman is an attorney for the New York County Defender Services, which supplied VICE News with the data on its clients’ races.

Days after that VICE News report, the Manhattan district attorney’s office released data confirming that most of its protest-linked arraignments involved non-white people. Of the 484 people arraigned in what the office dubbed “protest and ‘looting’ related cases” between May 28 and June 4, just 30 — or 6% — were white.

About 430 of those arraignments involved felonies. The top charge in most of the cases was burglary in the third degree.

The racial disparity in Manhattan takes on new resonance in light of the data from the attorney general’s office, which found that nearly 1,500 of the protest-linked arrests occurred in Manhattan. Fewer than 350 arrests took place in Brooklyn, and another 250 happened in the Bronx.

In its report, the Office of the Attorney General also details a litany of complaints it received about the NYPD, which include allegations of excessive force, mistreatment of essential workers, and detentions of neutral legal observers (who attend protests to monitor police conduct and help advise arrestees of their rights). In response, the office also offered several measures to reform the police, such as strengthening accountability for officers and crafting what the report calls “clear, carefully calibrated standards for the use of force with real consequences for violations.”

Its recommendations, however, likely won’t appease protesters, many of whom have demanded that the NYPD be defunded or abolished entirely. The office has pledged to continue investigating the NYPD’s interactions with protesters.

Cover: Protesters walking across the Brooklyn Bridge after a peaceful memorial for George Floyd held at Cadman Plaza Park in Brooklyn, New York, NY on June 4, 2020. Protests are taking place across the country after the death of George Floyd, while in police custody in Minneapolis, was filmed by a bystander. (Photo by Christopher Lazzaro/Alive Coverage/Sipa USA)(Sipa via AP Images)

How to Maintain a Football Field

Noname’s Response to J. Cole and 12 Other Songs We Loved This Month