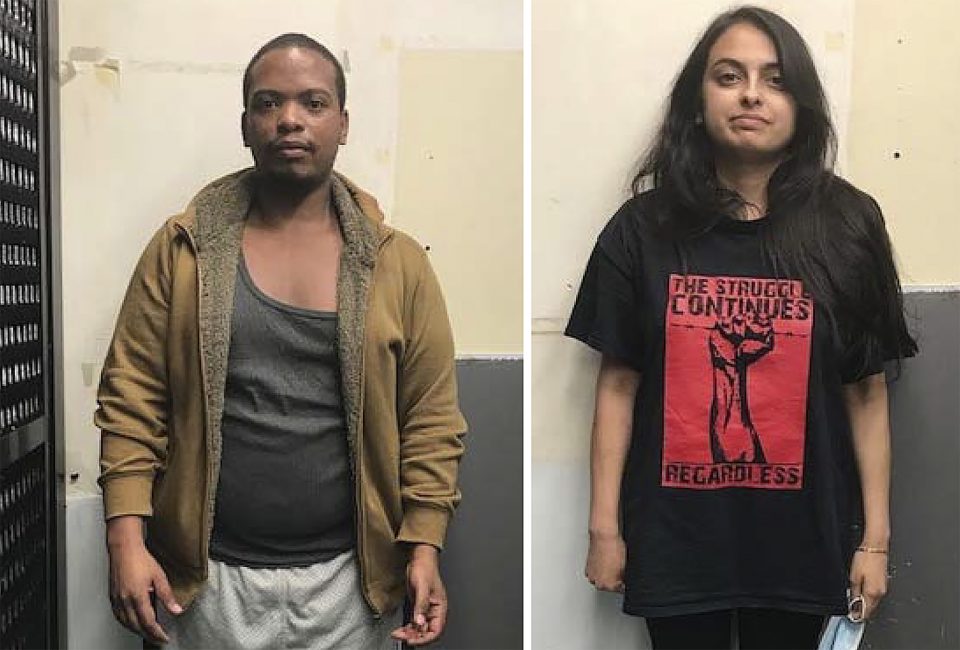 The two New York lawyers accused of throwing a Molotov cocktail at an empty New York police car during protests in late May were released from custody Tuesday night after spending weeks in solitary confinement.

Despite federal prosecutors’ efforts to keep the pair jailed until their trials, the U.S. Court of Appeals for the 2nd Circuit upheld a lower court’s decision to grant bail to Colinford Mattis, 32, and Urooj Rahman, 31. They were released on the original terms: $250,000 bond and electronic monitoring.

“We are aware of no case where the fact that, prior to the offense charged, the defendants lived lives fully in accordance with the law, dedicated those lives to societal betterment, and were employed in a profession that values ethics somehow militates against granting bail,” wrote Judge Peter Hall in the majority opinion. “An individual is more than the crime of which that individual has been accused.”

The two lawyers had been held in the Metropolitan Correctional Facility in Brooklyn since June 5. The facility, which has had at least one coronavirus-related death, put the pair into solitary confinement as a quarantine measure.

They were arrested on May 30, after Rahman threw what authorities described as a Molotov cocktail into an empty NYPD car, according to a criminal complaint. Rahman left the scene in a minivan that was allegedly driven by Mattis. She was accused of also having tried to induce others to throw similar explosives.

They have been charged with use of explosives, arson, and using an explosive to commit a felony. The government also tacked on an additional charge that Rahman’s lawyer told VICE News is usually seen in cases of gang violence or a terrorism case.

Together, these charges carry a 45-year mandatory minimum prison sentence.

“Urooj’s family and hundreds of supporters could not be more pleased with today’s decision that reunites her with her mother. It is the first step on the road to justice in this case,” said Rahman’s attorney Paul Shechtman in a statement. Rahman is the primary caretaker for her ailing mother.

“I had the pleasure of telling Colin’s family that he was coming home, and I can’t begin to tell you the relief and joy when they heard the news,” said Sabrina Shroff, Mattis’ lawyer. Mattis takes care of his three young foster siblings.

The arrest of the pair captured headlines across New York City, as the case was held up as evidence that once-ordinary people had seemingly been induced into mayhem by the protests sparked by the May 25 police killing of George Floyd in Minneapolis. Neither Mattis nor Rahman had any criminal history.

In a bail hearing last week, prosecutor David Kessler maintained that because Rahman and Mattis were lawyers, they should have known just how illegal their alleged actions were.

“This is not a case about a youthful indiscretion or a crime of passion; it’s about a calculated, dangerous crime [that] risked the lives of innocent civilians and first responders,” Kessler told the judges on the appeals court “This is a fundamental change for two lawyers, who have practiced law, to go this fair.”

But Shechtman said that both defendants had gone home and stayed home after being initially released on house arrest. They’d also put loved ones on the hook for bail.

“This was an aberrant act by two thoroughly decent young people, people who if you put this aside you would be proud to have as your daughter, a son, or your child to have as a friend,” Shechtman said. “It was an act that grew out of frustration and anger. It was a sobering experience, the arrest, for both of them. It has become more sobering. They have both woken up in solitary confinement in the MDC, in the midst of this pandemic.”

In a brief supporting bail for the two, 56 former federal prosecutors also argued that prosecutors in this case weren’t considering any factors normally weighed in bail hearings, such as criminal history, stable job, or family obligations.

“The implication is that these were like the bombs used in the Tsarnaev Boston bombers case, or these were like an al Qaeda- or ISIS-type attack,” Dixon said. “That’s clearly not the case. That’s not actually what happened based on what we know on the record.”

Cover: This May 30, 2020 booking photo provided by the United States Attorney’s Office of the Eastern District of New York, shows Colinford Mattis, left, and Urooj Rahman, both Brooklyn attorneys, after they were arrested for allegedly firebombing a police vehicle in New York. (U.S. Attorney’s Office via AP)