The work, done by the Los Angeles-based Getty Conservation Institute after years of research and officially presented Thursday, aims to minimize scratches, dust damage and microbiological growth from breath and humidity brought in by tourists. Previous visitor damage included graffiti, scratches and lost items inside the ancient tomb.

“The water vapour produced by the visitors’ breathing affected everything in the tomb,” said Hussein Shaboury, an arts professor at Alexandria University. “We had to change this and create a method by which fresh air enters the tomb, and air is circulated, in a way, where all the air in the tomb is changed [every] 30 minutes.”

A guard looks at ancient Egyptian drawings and the sarcophagus in the newly renovated tomb wall of King Tut on Thursday. (Mohamed Abd El Ghany/Reuters)

The upgrade includes new lighting, wooden floors, a ventilation system and a painting restoration to keep up with the thousands of tourists who visit one of Egypt’s most popular sites every year.

The Getty Conservation Institute said that the most dangerous part was moving the 250-kilogram casing containing the mummy of Tut outside of the tomb to renovate the flooring and ramps.

The nearly intact tomb of King Tut, who ruled Egypt more than 3,000 years ago, was discovered in 1922 by Howard Carter in the Valley of the Kings, located on the west bank of the Nile River in Luxor. For many, King Tut embodies ancient Egypt’s glory, because his tomb was packed with the glittering wealth of the 18th Dynasty, which ruled from 1569 to 1315 BC. 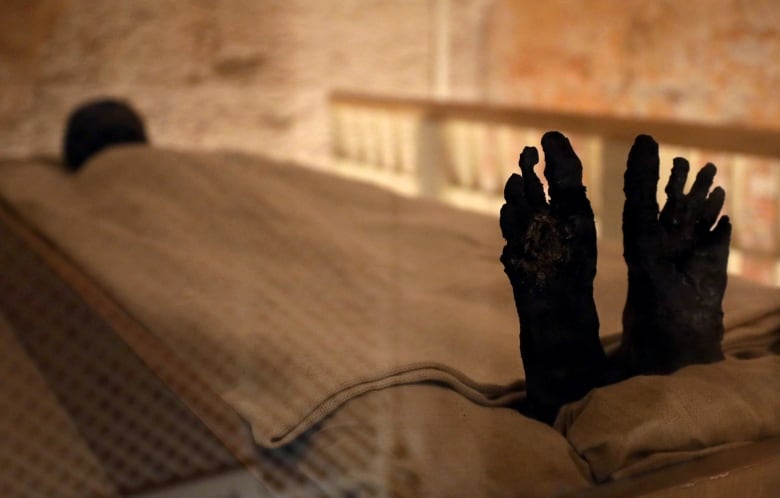 The mummy of King Tut is on display in his newly renovated tomb on Thursday. (Mohamed Abd El Ghany/Reuters)

The decade-long restoration project was postponed due to political instability in Egypt in 2011, but continued sporadically until its opening this year.

Conservationists, architects and scientists took part in the meticulous process that required the team to work at different times of the year.

Spotify down: Music streaming app not working on Android, iOS in fresh outage