Adolescents and young adults who regularly use cannabis but stop for 30 days have better memory and an improved ability to learn compared to peers who continue to smoke, vape or ingest pot, a study has found.

The study by researchers at Massachusetts General Hospital focused on two broad areas of cognitive function — attention and memory — in a group of 16- to 25-year-olds who were regular users of cannabis, indulging at least once a week.

Roughly two-thirds of the 88 subjects were randomly assigned to abstain from weed for 30 days, while the remainder continued routine use. Researchers completed regular assessments of thinking and memory of participants during the 2015-16 study period.

Frequent urine tests were given to verify those in the no-cannabis group had stayed away from the drug. Almost 90 per cent met the criteria for 30 days of continuous abstinence.

“Our findings provide two pieces of convincing evidence,” said lead author Randi Schuster, director of neuropsychology at the Center for Addiction Medicine at the Boston hospital.

New research from Health Canada finds teens and young adults use cannabis more than any other groups in Canada. (Juan Mabromata/AFP/Getty Images)

“The first is that adolescents learn better when they are not using cannabis,” she said. “The second — which is the good News part of the story — is that at least some of the deficits associated with cannabis use are not permanent and actually improve pretty quickly after cannabis use stops.”

That improvement occurred largely during the first week of abstinence, say the authors, whose research was published Tuesday in the Journal of Clinical Psychiatry.

However, the study found no difference in attention — the ability to remain focused on a visual task, for instance — between the two groups by the end of 30 days.

Schuster said there are a number of potential reasons, including the possibility that a longer period of abstinence is needed to see a reversal of attention deficits that occur with marijuana use.

Cannabis use highest among people in their early 20s

The research was published on the same day as Health Canada released the latest national data on tobacco, alcohol and drug use among Canadians aged 15 and older, which shows that use of cannabis is highest among youth aged 15 to 19 years (19 per cent) and young adults aged 20 to 24 (33 per cent).

The study authors note that adolescence and young adulthood are critical times for brain development, specifically for brain regions that are most susceptible to the effects of cannabis, in particular the psychoactive ingredient THC.

A 2016 study from the same research team found that cannabis users aged 16 and under had difficulty learning new information, a problem that was not observed in that study among users aged 17-plus.

“When I see these data, I get worried that regular use in young users may negatively impact their ability to achieve at their highest potential,” Schuster said from Boston. “One of my big concerns is how this plays out in a classroom and is it keeping them from achieving and learning?”

Dr. Romina Mizrahi, a clinician-scientist at the Centre for Addiction and Mental Health in Toronto, called the Boston research “important.”

“What was particularly surprising to me is the fact that these young people who are using cannabis were only (using it) at least weekly, which suggests that even … what you would call weekend recreational use is associated with some impairments, which are improved following abstinence,” she said Tuesday.

Schuster said there are still a lot of questions to be studied, including whether attention might improve and memory would continue to be enhanced with longer periods of cannabis avoiDance. 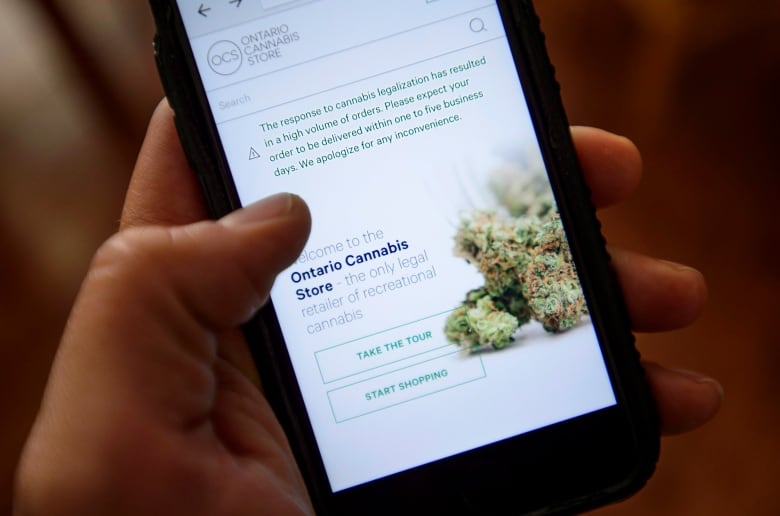 In Ontario, the only legal way to purchase cannabis is online. Visitors to the government’s online cannabis store must first enter their birth date to confirm they’re older than 19. The age is then verified using identification upon delivery. (Sean Kilpatrick/The Canadian Press)

Those are issues that will be addressed in two larger follow-up studies her team is conducting, including one that will look at younger participants — aged 13 to 19 — and a group that has never used cannabis, to help determine whether cognitive improvements produced by abstinence return participants to performance levels similar to those of non-users.

A second trial will follow young cannabis users who abstain for six months, investigating whether cognition continues to improve beyond 30 days and if those improvements can affect school performance.

Academic success may hang in the balance

The ability to learn or “map down” new information is a critical facet of success in the classroom, Schuster said.

“Young cannabis users who stop regular — weekly or more — use may be better equipped to learn efficiently and therefore better positioned for academic success,” she said.

“We can confidently say that these findings strongly suggest that abstaining from cannabis helps young people learn, while continuing cannabis use may interfere with the learning process.”

Mizrahi agreed, saying that it’s crucial that young people understand that their brains are still developing until about age 25, and that cannabis can interfere with the system that regulates that maturation process.

“In other words, you’re affecting the building blocks of the final brain architecture,” she said. “So it’s dangerous when your brain has not yet fully developed, because it may not fully develop as it would have had young people not used cannabis.”

Cristiano Ronaldo believes these five players are his rivals for the Ballon d’Or, no Lionel Messi or Neymar