​Kamar Jorden scored a pair of touchdowns to lead the Calgary Stampeders to a 43-39 win over the visiting Ottawa Redblacks on Thursday.

Marquay McDaniel had a two-point convert catch with kicker Rene Paredes adding a field goal for the hosts. Paredes made just one of four convert attempts, however.

Dontae Spencer had a pair of touchdowns for Ottawa, with Brad Sinopoli and Mossis Madu Jr., also contributing majors.

The teams traded punt returns for touchdowns. Spencer ran the ball in from 96 yards and Adeleke from 71.

Harris and Spencer combined on a 65-yard touchdown pass for Ottawa less than a minute after Mitchell’s eight-yard pass to Jorden late in the fourth quarter.

The Redblacks were also within a field goal to start the quarter following Sinopoli’s 34-yard reception and a Maher convert. Maher’s 28-yard field goal at 10:57 of the third had made it 30-20.

Stampeder linebacker Alex Singleton’s hard tackle on Patrick Lavoie knocked the ball loose for Maleki Harris to scoop and score from 46 yards out at 5:18 for a 30-17 lead.

Buckley kept the ball on a short-yardage package and scored on a 60-yard scamper to start the second half. A two-point convert attempt failed.

Calgary led 17-6 midway through the second quarter, but it took the Redblacks just over a minute starting at 12:14 to deadlock the game with a field goal, touchdown and two-point convert before halftime. 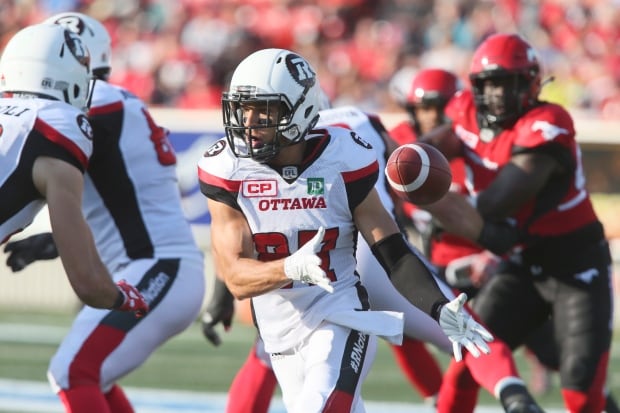 Josh Stangby (87) of the Ottawa Redblacks flips the ball back to his quarterback during first quarter CFL action against the Calgary Stampeders on Thursday. (Mike Ridewood/The Canadian Press)

After a 30-yarder from Maher, Spencer scored on a punt return, followed by a three-yard rush from Madu Jr., for two points.

A blocked punt by Charlie Power and recovery by Terry Williams gave Calgary the ball on Ottawa’s eight-yard line midway through the quarter.

Mitchell couldn’t connect with his receivers, so the Stampeders settled for a 15-yard field goal from Paredes.

Mitchell did find Michel in the end zone with a 16-yard touchdown throw early in the quarter. McDaniel’s three-yard reception generated the extra two points.

With the Redblacks threatening from 11 yards out to end the opening quarter, pass knockdowns by Calgary’s Singleton and Ciante Evans held them to an 18-yard field goal.

Calgary scored on Mitchell’s 15-yard strike to an airborne Jorden stretching for the ball at the goal line at 8:32.

The Redblacks would have scored on Harris’s first throw of the game when Ellingson ran a 39-yard pass into the end zone.

It was called back because of an illegal blocking penalty to Sinopoli. Ottawa settled for a 33-yard field goal from Maher.